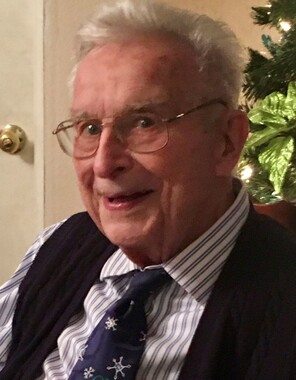 Back to Carl's story

KEYSER - Dr. Carl A. Liebig, M.D., 97, of Keyser, joined those in Heaven on Saturday, Dec. 6, 2019.
Born on Dec. 22, 1921, in Cincinnati, Ohio, he was the son of the late Carl and Martha (Risch) Liebig. Preceding him in death are his wife, E. Jane Liebig; his eldest son, Dr. Carl W. Liebig, M.D.; an infant grandson, Brian C. Liebig; a daughter-in-law, Rita Liebig; sister, Vivian Earley; an infant sister, Maxine Liebig; sister-in-law, Dorothy Hoffman and a brother-in-law, Dr. Richard Larson.
Surviving him are his sister, Geraldine Larson of Illinois; his children, Pamela Nagel of Berlin, Germany, Paul Liebig of Keyser, Carol Marsh and husband, Timothy of Buckhannon, and Dr. Craig Liebig, O.D. and wife, Gail of Bridgeport; a daughter-in-law, Delores Liebig of Bridgeport; grandchildren, Jennifer Shanley and husband, Tom, Teresa Lunsford and husband, David, Stephanie Storti and husband, John, Dr. Christopher Liebig and wife, Julie, Janina McDaniel and husband, David, Erica Liebig Pritts and partner, Tim Fisher, Julie Beth Bosley and husband, Devin, Dawn Liebig, Janee Dobbins and husband, Christopher, Jesse Liebig, Traci Knabenshue and husband, BJ; 20 great-grandchildren, nieces and nephews and Michael Redman, who was very dear to him and like a son.
During his youth he studied music in his hometown of Cincinnati and he became an accomplished pianist. In 1942 he joined the military and decided to study medicine under a program which was sponsored by the military with the provision that after his studies, he would be required to serve in the military for another six years and work as a doctor. He attended pre-med studies at Northwestern University in Chicago and then medical school at the University of Cincinnati. Upon finishing medical school he was sent to Panama and advanced to the rank of Captain. During his military time, he served in the Army, Navy and Coast Guard. After the war he decided to become a surgeon and worked at Veterans' Hospital in Dayton, Ohio and then became Chief Resident at Cincinnati General Hospital.
He then decided to move with his family to Petersburg, where he worked for three years, then to Georgetown, Ohio for five years. Then the beautiful mountains of West Virginia beckoned him to return, but this time, in 1966 it was to Keyser, which became the family's new home. Besides practicing surgery in Keyser he was also the Medical Director of the Mineral County Health Department for 27 years and the Director of the Emergency Room of Potomac Valley Hospital for many years. In addition he was the staff Doctor at Mt Storm Medical Clinic and also at the Westvaco onsite medical clinic. His medical career spanned a period of over 60 years and until the end of his life he constantly read medical journals and articles. He had the honor of holding Fellowships in General Surgery from the American College of Surgeons and in Emergency Room Practices.
Dr. Liebig loved attending local sporting events. For 25 years he gave the young athletes of Keyser the required physical exams which they needed each year in order to participate in sports. For his services he was later given a lifelong pass which allowed him to attend any high school athletic event in Keyser. He was extremely proud of that pass and loved using it.
He was a strict but loving father, and a man of much discipline - except when it came to sweets. He loved chocolate cake and ice cream and if you wanted to see his eyes light up, these three words would always do it: Lemon Meringue Pie!
Friends may call at the Smith Funeral Home, Keyser Chapel, on Friday, Dec. 20, 2019, from 6-8 p.m.
A funeral service will be conducted at the Smith Funeral Home, Keyser Chapel, on Saturday, Dec. 21, 2019, at 11 a.m.
Entombment will be in the Potomac Memorial Gardens Mausoleum, Keyser.
The family wishes to thank the people of Keyser, who made him and all of us feel so welcome when we arrived in 1966 and also in the years that followed. We also thank Sarah Harris, Pastor Jerry Eisenhour and the congregation of Mt. Zion Church, Linda Shroyer, Paula Eisenhour and all of the staff at Potomac Valley Hospital and Mineral County Health Department, Sandy Bosley of the Potomac Valley Hospital dietary department and her wonderful team and Dr. Harshad Bokil for many years of excellent care.
In lieu of flowers, donations in memory of Dr. Liebig may be made to Burlington United Methodist Family Services, 120 Hope Lane, Burlington, WV 26710.
Condolences and personal reflections to the family may be left after Dr. Liebig's obituary at smithfuneralhomes.net.
Published on December 13, 2019
To plant a tree in memory of Carl A. Liebig, please visit Tribute Store.

Plant a tree in memory
of Carl

A place to share condolences and memories.
The guestbook expires on March 12, 2020.