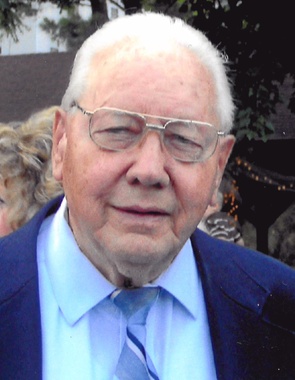 Back to Donald's story

CUMBERLAND - Donald D. Lantz, 97, of Cumberland, passed away on Wednesday, Dec. 11, 2019, at Sincerely Yours Assisted Living Facility on Williams Road, Cumberland.
Born on Dec. 13, 1921, in Ridgeley, W.Va., he was the son of the late Thomas A. Hedricks Lantz and Flossie Marie (Wilson) Lantz. In addition to his parents, he was preceded in death by his wife of 70 years, Wilma G. (Stafford) Lantz; a daughter, Gloria D. (Lantz) Crawford; his four brothers, Wilson H. Lantz, Earl Eugene Lantz, Robert L. Lantz, and William R. Lantz; two sisters, Elma M. Lantz, and Alma J. (Lantz) Davis; step-sister, Anna Lee (Lantz) Oester; and son-in-law, David R. Brown. Don was the last surviving member of his immediate family.
Don retired after 33 years from Home Beneficial Life Insurance Company. He served in the United States Army during WWII with the 6th Division. He was a life member of the Korean War Veterans, the 6th Division Association, the VFW Post 1411, the American Legion Post 13, and the DAV. He was also a life member of the Outdoor Club and the District 16 Volunteer Fire Department. He was an active member of The Church of Jesus Christ of Latter-day Saints, where he held numerous positions. Don was a member of the Fort Hill Band Parents Association, and worked the concession stands and collected tickets for all sporting events for over 25 years with his wife, Wilma.
Donald is survived by his daughters, Sandra J. Liedy and husband, Bernard, Janet K. Carder, and Donna L. Brown; sons-in-law, Roger D. Crawford, Philip M. Carder, and James E. Judy, all of Cumberland; 15 grandchildren; 33 great-grandchildren; and 16 great great-grandchildren.
Family and friends will be received at the Scarpelli Funeral Home, P.A., 108 Virginia Ave., Cumberland, on Monday, Dec. 16, 2019, from 2-4 and 7-9 p.m.
A funeral service will be conducted at the Church of Jesus Christ of Latter-day Saints, 12205 Gramlich Road SW, LaVale, on Tuesday, Dec. 17, 2019, at 11:30 a.m. Brother Doug Reineke will be conducting, Brother Don Bishop will be speaking, and prayers will be offered by Brother John Cline and Brother Lucian Herriott. Music will be provided by Sister Carissa Bishop, and Darlene Spencer as organist. Additional visitation will be held one hour prior to the funeral at the church.
Pallbearers will be Don's grandsons, Timothy Carder, Matthew Carder, Patrick Carder, Jon Crawford, Eric Crawford, Mike Gelles, and Brian Davis. Honorary pallbearers will be grandsons, David Liedy, Brian Liedy, Philip Carder, Thomas Carder, Shane Brown, and Adam Crawford.
Interment will be in the Maryland State Veteran's Cemetery, Rocky Gap. Military honors will be accorded by members of the Fort Cumberland Post 13 Honor Guard.
Special thanks to the VA Home Healthcare, his caregivers: Tammy, Pam, Cathy, Rhonda, and Kim, the WMHS Hospice Unit, and to Faye and Connie from Sincerely Yours Assisted Living Facility.
Condolences for the family may be left at www.ScarpelliFH.com
Published on December 13, 2019
To plant a tree in memory of Donald D. Lantz, please visit Tribute Store.

Plant a tree in memory
of Donald

A place to share condolences and memories.
The guestbook expires on March 12, 2020.