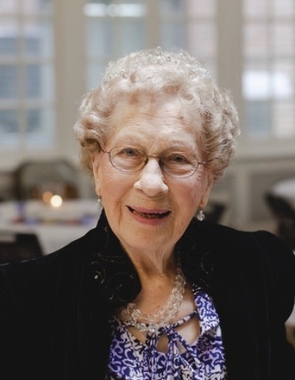 Back to Eleanor's story

GRANTSVILLE - Eleanor Leslie Hutson Kemp Knotts, 101, of Rawlings, died on Saturday, Jan. 11, 2020, at the Goodwill Retirement Community in Grantsville.
Born Nov. 19, 1918, she was the daughter of the late Frank M. Hutson and Ora (Heckert) Hutson. She was a 1937 graduate of Allegany High School. As the youngest of her five siblings, Elizabeth Armstrong, Marion May, Dorothy Grimes, and Bill Hutson, she was the last surviving member of her immediate family.
Eleanor was preceded in death by her two husbands, Paul Horace Kemp Sr in 1949 and Leon "Buck" Knotts in 1993.
She worked for Pyle Brothers, Allegany Ballistics Lab (ABL), Barton's Cow Ice Cream, the Rawlings Post Office, and LaVale Rexall Drug Store. She also loved going to Keyser, W.Va., weekly for her hair appointments where she enjoyed eating at the Rosemont Restaurant, which became the Taste of Home Restaurant until it closed.
She was a lifelong member of the Rawlings United Methodist Church where she served on the church board, was an office secretary, helped set up communion, and served fellowship dinners. She was also a long-time member of the choir and hand bell choir serving into her late 80's. Her family lovingly called her the "church watch dog" since she lived next door to the original church and directly across the street from the new church. In addition, she was also a member of the Cumberland Historic Cemetery Organization.
Eleanor was a woman who loved her family and enjoyed being involved in their lives as well as all her grandchildren. She never wanted to inconvenience anyone, was happy with her routines, liked her personal quiet time, and was a peaceful neighbor to those around her. She loved 1960's rock and roll music, and especially enjoyed attending performances by The Fabulous Hubcaps. She attended her last performance with them when she was 100 years old, where they acknowledged her to the audience as their favorite fan.
She is survived by her children, Carole Ann Lovett and husband, Bill, The Villages, Fla., and Paul Kemp and wife Lorraine, Monrovia; grandchildren, Chad W. Lovett, Florida, Andrea (Kemp) Bostic (husband, Matt), Alabama, Sarah (Kemp) Wehling (husband, Ben), Georgia, Paul T. Kemp, Maryland, and Ryan M. Kemp, Pennsylvanis. She is also survived by five great-granddaughters, eight great-grandsons, and one great-great grandson. She will be remembered by her only surviving sister-in-law, Bettie (Kemp) Armstrong, as well as many nieces and nephews.
Eleanor resided in the Rawlings community for most of her life, and moved to the Cumberland Arms Apartments in downtown Cumberland in 2006. She then moved to Goodwill Retirement Community in 2015. She will be remembered by all her friends and neighbors.
Eleanor will be cremated, and a memorial service will be held at a later date.
In lieu of flowers, memorial contributions may be made to Rawlings United Methodist Church, 18910 McMullen Hwy. SW, Rawlings, MD 21557, or Goodwill Retirement Community, 891 Dorsey Hotel Road, Grantsville, MD 21536.
The Upchurch Funeral Home, P.A., Cumberland, is handling the arrangements.
Published on January 14, 2020
To plant a tree in memory of Eleanor Leslie Knotts, please visit Tribute Store.

Plant a tree in memory
of Eleanor

A place to share condolences and memories.
The guestbook expires on April 13, 2020.

Michelle Lopez
So sorry for your loss. I have fond memories of Miss Eleanor as I knew her. I am Buck Knott's granddaughter and spent time as a child in Rawlings with her and my grandfather. She was always very sweet to me. I know she will be missed.
Cindy (Jordan) Pannone
We lived next door to Eleanor in Rawlings for 2 years, in the old Methodist Church Parsonage. My family spent time visiting with her and loved her very much. Rest in peace, dear friend. We love you.
View all