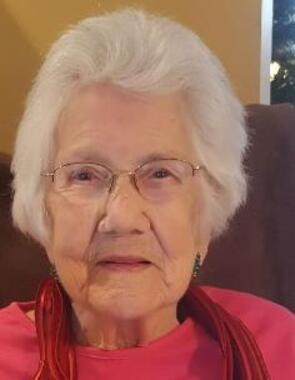 Back to Genevieve "Gen"'s story

CUMBERLAND - Genevieve "Gen" Elizabeth Davis, 101, of Cumberland, passed away peacefully on Sunday, Dec. 8, 2019, at The Lions Center for Rehabilitation and Extended Care, with her loving granddaughter, Shannon Marie, by her side.
Born Sept. 19, 1918, in Cumberland, Mrs. Davis was the daughter of the late Lee Blackiston See and Martha Jane (Durst) See. She was also preceded in death by her stepmother, Blanche E. See, who raised her; and her uncle, former Maryland State Senator, Charles M. See, who was blind from an early age and later in life, Gen became his eyes. She was the last surviving member of her immediate family. She was also preceded in death by her former husband, Glenn K. Davis, the father of her children.
Gen was a graduate of Penn Avenue High School, Class of 1936, which was the last graduating class for Penn Avenue High School and also a graduate of Catherman's Business School, Class of 1937. She was a life-member of the Holy Cross Episcopal Church. Gen and Glenn were former owners of Bopp's Flower Shop for thirty years.
Gen is survived by her son, Glenn L. Davis and wife, Cherie, Bonita Springs, Fla.; her daughters, Gail J. Ralston and husband, John "Jerry" C. Ralston Sr., Frostburg, and Gene't E. Davis-Graff and husband, Thomas D., Hunt Valley. She is also survived by her grandchildren, Deborah L. (Davis) Korb, John C. Ralston Jr. and fiancée, Lori A. Lewis, Darrin L. Davis and wife, Whitney, Shannon M. Ralston-Imes and fiancé, Matt McMorran, Thomas D.D. Graff and wife, Erin, Marcus L. Graff and wife, Krystyna, and Taylor G. Graff and wife, Sarah. Also surviving are great-grandchildren, Carter and Carson Imes, Brooke and Brianna Ralston, Benjamin, Simon, Jonathan, Anastasia, Aleksandra, Audim, Walter, and Oscar Graff, Delaney and Sydney Davis, Kristopher Korb and Kassidy (Korb) Bowman and husband, Stephen.
The family wishes to give heartfelt thanks to Dr. Sunil Gupta and his staff for the compassionate care Gen has received the past twenty years, and to The Lions Center and their staff for the attentive and compassionate care that Gen received while residing there since September of this year.
Friends will be received at the Adams Family Funeral Home, P.A., 404 Decatur St., Cumberland, (www.AdamsFamilyFuneralHome.com) on Wednesday, Dec. 11, 2019, from 4 to 7 p.m.
A funeral service will be conducted at the funeral home on Thursday, Dec. 12, 2019, at 11 a.m. with Reverend Martha Macgill officiating.
Pallbearers will be the grandsons.
Interment will be in Sunset Memorial Park.
Published on December 9, 2019
To plant a tree in memory of Genevieve "Gen" Elizabeth Davis, please visit Tribute Store.

Plant a tree in memory
of Genevieve "Gen"

A place to share condolences and memories.
The guestbook expires on March 08, 2020.

Karen Clark
Payers for you and your family
View all