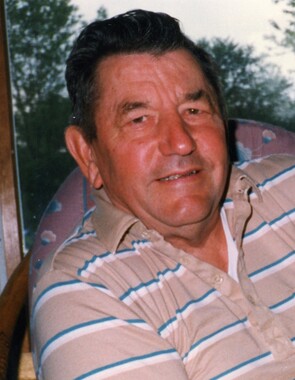 Back to George "Bill"'s story

George Francis "Bill" Reuschel, 95, of Cumberland, passed away Wednesday, Dec. 11, 2019, at Chamberlain Graceful Living.
Born Dec. 7, 1924, in Cumberland, Mr. Reuschel was the son of the late George Francis Reuschel Sr. and Frances (Heavner) Reuschel. He was also preceded in death by his first wife, Anita Colleen (Long) Reuschel; his second wife, Muriel (Robertson) Reuschel; his granddaughter, Chrystal Ebert; his daughter-in-law, Jackie Reuschel; his brothers and sisters, Vera, Gladys, Helen, and Joseph; and was the last surviving member of his immediate family.
A graduate of Fort Hill High School, class of 1942, Bill was a United States Army/Air Corps veteran, where he was a pilot instructor, and retired from Kelly-Springfield Tire and Rubber Company with 33 years of service. He was also a surveyor and played an import role in the building of the flood project. Bill was a former member of Saint John's Lutheran Church and a member of the Cumberland Outdoor Club and other organizations. In 1953, Bill built a camp at Great Cacapon and lived his life to be able to spend time there with his family. He was also involved in a fishing and hunting club.
Bill is survived by his daughters, Linda Torbet and husband, John, and Georgia Holler and husband, Stephen; and his sons, G. Michael Reuschel and wife, Karen, and W. Dave Reuschel. He also leaves behind his grandchildren, Michelle Parker and husband, Darrell, Stephanie Howard and husband, Robert, Michael Reuschel, and David Reuschel and wife, Shari; his stepdaughters, Linda Brockey and husband, Jerry, Bonnie Meagher and friend, Donna, and Cheryl Sioma and husband, Pete; as well as numerous great-grandchildren, step-grandchildren, step-great-grandchildren, nieces and nephews.
Friends will be received at Adams Family Funeral Home, P.A., 404 Decatur Street, Cumberland, (www.AdamsFamilyFuneralHome.com) on Monday, Dec. 16, 2019, from 10 to 11 a.m.
A funeral service will follow at 11 a.m. with Pastor Vicki Cubbage officiating.
Interment will be in Davis Memorial Cemetery.
Military honors will will be accorded at the cemetery by the Post 13 Veterans Honor Guard.
The family would like to thank his neighbors and close friends for all they have done for Bill over the years, and to Chamberlain Graceful Living and the WMRMC for all the care and compassion given to Bill.
In lieu of flowers, the family requests that memorial contributions be made to Chamberlain Graceful Living, 11609 Bierman Drive, SE, Cumberland, MD 21502.
Published on December 12, 2019
To plant a tree in memory of George "Bill" Francis Reuschel, please visit Tribute Store.

Plant a tree in memory
of George "Bill"

A place to share condolences and memories.
The guestbook expires on March 11, 2020.

Skip
Thank you for my Christmas memories spent with you and your family.
Terry Summerfield
I spent many hours at the cacapon camp with pap and family. Glad i saw it in color. Love you always.
Terry Summerfield
I shared many hours with pap in the cacapon camp. You will always be in my heart. Glad i saw it in color. Love you.
Linda Brockey
We have so many good memories of Bill. Growing up...when we went to camp...always a fun time, especially the 4th of July! All the good times with him and mom. I still bake my ham the way he taught me, and his BBQ beef! Many special memories, I will cherish them. Love ya, Bill.
View all