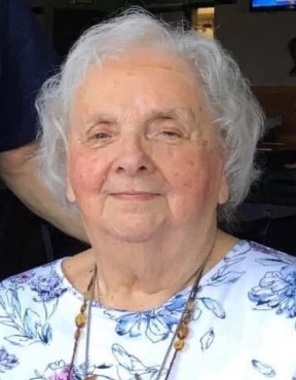 Back to Helen's story

CRESAPTOWN - Helen Louise Keady, 89, of Cresaptown, passed away Friday, Dec. 13, 2019, at the Western Maryland Regional Medical Center.
Born July 11, 1930, in Thomas, W.Va., she was the daughter of the late Preston L. and Margaret H. (Cosgrove) Benford. After her parents' death in 1936, she was raised by her uncle and aunt, the late Albert and Catherine Kerns. In addition to her parents, uncle, and aunt, she was preceded in death by her husband, George E. Keady, on Aug. 7, 2006; her sister, Betty Jean Benford.
Helen was a 1948 graduate of Fort Hill High School. She retired as a line cook from Gehauf's Restaurant in 1992. For a time, she also worked at the Frostburg Senior Center. As an active member of Shaft United Methodist Church, Helen was a member of the Shaft United Methodist Church Women and the church choir. She enjoyed singing, and she also belonged to the Ladies' Barbershop Harmony Singers.
She was a huge fan of the Baltimore Orioles and the Pittsburgh Steelers. Helen was a writer who composed short stories, and when she wasn't writing, she was spouting jokes (and hilariously messing up the punch lines) or witty zingers. She loved people, but her favorite people were always her beloved children.
Surviving are her children, Steven George Edward Keady and wife, Susan, Boalsburg, Pa., and Wendy Ada Keady, Cresaptown; dog, Meggie Grace; cats, Callie and Sal.
Friends will be received at the Scarpelli Funeral Home, P.A., 108 Virginia Ave., Cumberland, on Monday, Dec. 16, 2019, from 5 to 8 p.m.
A funeral service will be conducted at the funeral home on Tuesday, Dec. 17, 2019, at 11 a.m. with Pastor Hee Rak Kim officiating.
In lieu of flowers, memorial contributions may be made to the Shaft United Methodist Church Missions Fund or to any no-kill animal shelter.
Condolences may be left at www.ScarpelliFH.com.
Published on December 14, 2019
To plant a tree in memory of Helen Louise Keady, please visit Tribute Store.

Plant a tree in memory
of Helen

A place to share condolences and memories.
The guestbook expires on March 13, 2020.

Wendy, Steve and Family,
So very sorry for your loss. Our prayers and love to you as you mourn the loss of your Mom. She was indeed a very special lady.

Wildlife For Everyone Foundation

Arrive in Style was purchased for the family of Helen Louise Keady by Wildlife For Everyone Foundation.  Send flowers