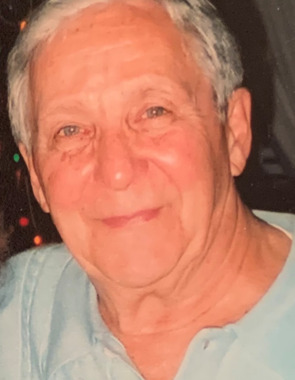 Back to Jenning's story

Jennings B. Robinson Jr., known as "JB", 94, of Cumberland, died Thursday, Jan. 16, 2020, at Goodwill Retirement Community, Grantsville, surrounded by his family.
Born Dec. 26, 1925, in Hagerstown, he was the son of the late Jennings B. Robinson Sr. and Dorothy (Ford) Robinson. He was preceded in death by his wife, Alberta Theresa (Ley) Robinson (also affectionately known as Birdie). They were married 50 years and members of SS. Peter & Paul Catholic Church.
He was a graduate of LaSalle High School and attended the University of Maryland.
Mr. Robinson was a Navy veteran, serving during World War II. He was a retired yardmaster with over 40 years' service with the CSX Railroad. After his retirement, JB enjoyed volunteering for 20+ years at Sacred Heart Hospital. His interests also took him to auctions and estate sales.
JB and his wife, Birdie, would also volunteer at St. Anthony Place Food Pantry.
He is survived by four sons, Michael Craig Robinson and wife, Judy, Hagerstown, Brian Robinson and wife, Annette, Hagerstown, John Christian "Chris" Robinson and wife, Patty, Bluffton, S.C., Douglas Paul "Doug" Robinson and wife, Robin, Richmond, Va.; grandchildren, Michael C. Robinson Jr. and wife, Krystal, Douglas, Mass., Shaunna Robinson of N. Falmouth, Mass., Brian Robinson Jr., Daniel Robinson and wife, Meggan, Elizabethtown, Pa., Dr. Anthony C. Robinson and wife, Brandi, State College, Pa., Andrea Robinson and husband, Geoff Moffat, Superior, Col., Rachel Robinson-Chaves and husband, Phillip Chaves, Midlothian, Va., David Robinson, Richmond, Brian Urbas and wife, Alicia, Holly Springs, N.C,; and ten great-grandchildren. Special Note: Grandson Michael Robinson named his firstborn son, Avery Jennings Robinson, in honor of his grandfather.
Also surviving are two sisters, Jean Lowe, Baltimore, and Dorothy Mikoloski, Glen Burnie; a brother, Dr. John "Jack" Robinson, Glen Burnie; and numerous nieces and nephews.
The family would like to give sincere thanks to the Goodwill Retirement Community for the loving care they provided JB during the last 2½ years.
Friends will be received at Scarpelli Funeral Home, P.A., 108 Virginia Ave., Cumberland, on Monday, Jan. 20, 2020, from 4 to 6 p.m. A Christian wake service will be conducted at 6 p.m.
A funeral Mass will be celebrated at SS. Peter and Paul's Catholic Church (Shrine), 125 Fayette St., Cumberland, on Tuesday, Jan. 21, 2020, at 11 a.m. with Father Greg Brown as celebrant.
Interment will be in Maryland State Veterans Cemetery at Rocky Gap, Flintstone.
Pallbearers will be David Robinson, Anthony Robinson, Brian Urbas, Michael Robinson and Phillip Chaves.
In lieu of flowers, memorial contributions may be made in Mr. JB Robinson's memory to St. Anthony Place (Food Pantry), care of OLM Office Center, 300 East Oldtown Road, Cumberland, MD 21502.
Condolences for the family may be made at www.ScarpelliFH.com.
Published on January 17, 2020
To plant a tree in memory of Jenning B. Robinson, Jr., please visit Tribute Store.

Plant a tree in memory
of Jenning

A place to share condolences and memories.
The guestbook expires on April 16, 2020.

TAMMY MCDONALD SPRIGGS
Was thinking of him the other day. Missed seeing him at auctions. Such a wonderful person! I'm sure he will be missed!
Bill Blizzard
JB was great man he would come to my Dad's auction and come visit us when my Dad was sick
Bob & Debbie Priebe

Joyful Memory was purchased for the family of Jenning B. Robinson, Jr. by Bob & Debbie Priebe.  Send flowers

America the Beautiful was purchased for the family of Jenning B. Robinson, Jr. by Fran and Travis Echols.  Send flowers

Karen
JB was volunteering when I was taking chemo in 2005. He was such a kind man. I’m glad I got to know him. Condolences to the family.