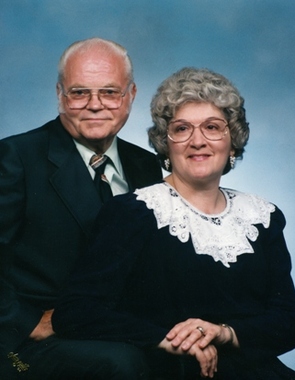 Back to Joseph "Josey"'s story

MOUNT SAVAGE - Joseph "Josey" Paul Frankenberry, 85, of Mount Savage, passed away Friday, Aug. 9, 2019, at Sterling Care - Frostburg Village.
Born Aug. 29, 1933, in Mount Savage, Mr. Frankenberry was the son of the late Joseph Allen Frankenberry and Edna Pearl (LeGeer) Frankenberry. He was also preceded in death by his wife of 56 years, Mary Ann Frankenberry, June 8, 2018; and was the last surviving member of his immediate family.
Josey was a United States Army Veteran (1953-1955) serving as MP and Heavy Armor on the DMZ during the Korean Conflict. He was a former employee of Wombaugh's, the Stroehman Bakery, and retired from Fibred. Josey owned and operated Joe's Truck and Body Repair. He also worked at Carter's Garage. Josey enjoyed drinking, raising hell with his uncles, and fighting as well as taking motorcycle trips, taking pride in his cars, trucks, bikes, house, and lawn. Josey also enjoyed spending time with his family.
Josey is survived by his sons, Joseph A. Frankenberry and wife, Stacey, and Brent P. Frankenberry; and his grandchildren, Katie Green and husband, JT, Sami Crosten and fiancé, Chris, Tim Everly and wife, Jessica, Kylee and Cassie Frankenberry; as well as Billy, Marcia, Brent, and Brandy Frankenberry. He also leaves behind his special great grandchildren, Zoey and Tyler, as well as numerous other great grandchildren; a cousin, who was raised as a sister, Judy LeGeer, Joe Rank and wife, Judy, who was like a brother to him; and numerous close friends.
A memorial service celebrating the life of Josey and Mary Ann will be held at the Adams Family Funeral Home, P.A., 404 Decatur St., Cumberland, (www.AdamsFamilyFuneralHome.com) on Sunday, Aug. 18, 2019, at 4 p.m. with Pastor Joann Dermer officiating. The family will receive friends two hours prior to the service.
Military honors will be accorded at the funeral home by the Post 13 Veterans Honor Guard.
A special thank you to Sterling Care-Frostburg Village, the 7th Floor at the Western Maryland Regional Medical Center, and Home Healthcare for all the care and compassion given to Josey.
Published on August 14, 2019
To plant a tree in memory of Joseph "Josey" Paul Frankenberry, please visit Tribute Store.

Plant a tree in memory
of Joseph "Josey"

A place to share condolences and memories.
The guestbook expires on November 12, 2019.

Restore the guestbook to view the 2 more posts by family and friends, and share a memory or message of condolence of your own.