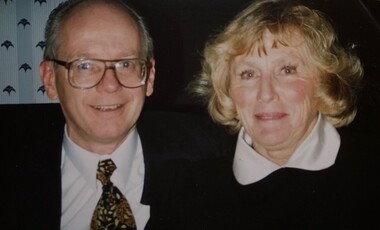 Back to Neal's story

Neal Kendig Nelson, 82, of Whitsett, N.C., former Cumberland resident, passed away Wednesday, Dec. 4, 2019, in Burlington, N.C.
Born March 30, 1937, he was the son of the late Winfree and Esther Kendig Nelson. Neal was also preceded in death by his wife of 50 years, Bette L. Nelson.
Neal was a graduate of Northwestern High School, Hyattsville. He attended Penn State University and was a graduate of University of Maryland School of Engineering in 1960.
He worked for Kelly-Springfield Tire Company/Goodyear Tire and Rubber Company for more than 40 years. In 1981, he was selected to receive the Goodyear Worldwide Spirit Award from all Goodyear locations across the globe.
Neal and his wife, Bette, were longtime residents of Cumberland. They were members of Cresaptown United Methodist Church and were active in the Cumberland YMCA swimming program. He was known for his quick wit, positive attitude, generosity and grace while battling a degenerative, neuromuscular disease.
He is survived by his children, Bart (Bethany Lukitsch), Beth Rhodes (Lee), Fawn Nelson (Bruce Onweller), and Brad (Erin). He is also survived by grandchildren, Ryan Nelson, Brandy Nelson Weiberg (Tim), Erin Rhodes Barrett (Jimmy), Jennifer Rhodes Nicholas (Jim), Luke Onweller, Bryn Onweller, William Onweller, Kylee Onweller, Neal Nelson, Sean Nelson, and Grace Nelson; and his five great-grandchildren, Nolan, Sam and Nathan Weiberg and Harper and Adalynn Barrett.
A graveside service will be held at Willow Street Mennonite Cemetery, Lancaster, Pa., Saturday, Dec. 14, 2019, at 11 a.m.
In lieu of flowers, memorial contributions can be made to Cresaptown United Methodist Church.
Please visit Neal's Memorial Page at www.TheGroffs.com.
Published on December 7, 2019
To plant a tree in memory of Neal Kendig Nelson, please visit Tribute Store.

Plant a tree in memory
of Neal

Bruce Boteler
I thought about looking up Neal, as we both worked together at IBM when Kelly was an IBM customer. Always liked Neal and so nice to hear about your family. My wife Judy passed away July 2016 from dementia, very sad after many years of marriage. I have 4 daughters, 4 sons- law and 8 grandchildren, all doing well with on granddaughter married. We moved to Roanoke County 1973 with IBM. My entire family is all here, which is very nice. Best regards to you and your family.
Mark and Chris Eisel

Beautiful in Blue was purchased for the family of Neal Kendig Nelson by Mark and Chris Eisel.  Send flowers

Dreams From the Heart Bouquet was purchased for the family of Neal Kendig Nelson by Your Virginia Tech Lacrosse Family.  Send flowers

America the Beautiful was purchased for the family of Neal Kendig Nelson by Tribute Store.  Send flowers

Beautiful in Blue was purchased for the family of Neal Kendig Nelson by Your Wealthcare Family.  Send flowers

Your friends at The Goat

Beautiful in Blue was purchased for the family of Neal Kendig Nelson by Your friends at The Goat.  Send flowers