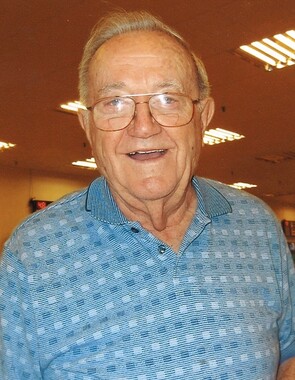 Olin Jack Perkins Sr., of Cumberland, passed away at his home Friday, Jan. 17, 2020.
Born Jan. 15, 1924, in Cumberland, he was the son of the late James S. and Katherine A. (Troutman) Perkins. He was also preceded in death by his wife of 57 years, Pauline G. (Schade) Perkins; sister, Eileen Mae Perkins; and a great-granddaughter, Angel.
Mr. Perkins graduated from Fort Hill High School in 1941. He enlisted in the U.S. Navy in 1943 and served in the Torpedo Squadron 80 aboard the USS Ticonderoga and the USS Hancock. While serving in the Pacific Theatre, Machinist Mate Second Class Perkins was awarded two air medals. Following the Second World War, he worked for the B&O and CSX railroads for more than 40 years as a machinist, retiring in 1985. He was a member of the Elks, Eagles and Moose. Jack was an avid golfer, who was a member of Fort Cumberland, Bedford Elks and Fore Sisters, and in later years, bingo became his favorite pastime.
He is survived by his two sons, Olin Jack Perkins Jr. and wife, Cynthia, Cumberland, and Gary Alan Perkins and wife, Deborah, Salisbury; as well as his former daughter-in-law, Sherry Perkins, also of Salisbury. He leaves behind five grandchildren, Heather Hook and husband, T.J., of Cumberland, Allison Whiteman and husband, Gregory, of Ridgeley, W.Va., Christopher Perkins and wife, Nicole, of Ridgeley, Amy Clause and husband, Scott, of Millersville, Scott Perkins, of Frederick; and three great-grandchildren, Hannah and Cameron Hook, of Cumberland, and Nathaniel Clause, of Millersville; brother-in-law, Richard Schade and wife, Rose; and sister-in-law, Wilda Brooks.
Memorial services will be held Thursday, Jan. 23, 2020, at 11 a.m. at Maryland State Veterans Cemetery at Rocky Gap, 14205 Pleasant Valley Road, N.E., Flintstone, with the Rev. Bruce McBride officiating.
Military honors will be accorded by Fort Cumberland Post 13 Honor Guard.
Special thanks are extended to WMHS Hospice Services staff for their excellent care. The family thanks Shay Lewis and the staff of the Veterans Home Based Primary Care Team for their support and services. The family appreciates the compassion, kindness and loving care provided by Sue Wigfield and her assistants, Pam Abe, Kim Scarlett, Nicole Reed, Kay Canfield and Mickie Fairall for the last 18 months. Sincere thanks go to Dawn Wolford and Dawn Snyder for their support, encouragement, and professional services.
In lieu of flowers, memorial contributions may be made to WMHS Hospice Services, 1050 Industrial Boulevard, Suite 19, Cumberland, MD 21502, the Riverside YMCA, 601 Kelly Road, Cumberland, MD 21502, or a charity of the donor's choice.
Condolences for the family may be made at www.ScarpelliFH.com.
Published on January 18, 2020
To plant a tree in memory of Olin Jack Perkins, Sr., please visit Tribute Store.

Plant a tree in memory
of Olin

Marlene (Verl) Perkins and Girls
i was sorry to hear of your Dad's passing. I remember many good times when George Perkins, Verl and others use to have picnics at the Perkins' home. My family and I will always remember those afternoons with love and joy and special times.
View all